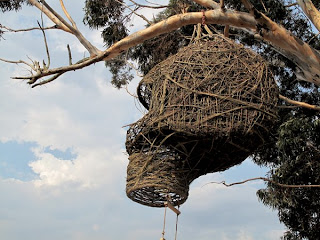 I always lived under weavers and always wondered what it was like up and in there.
Finally I deceided to make my fantasy reality.
The most difficult thing was finding the right person who understood exactly what I was talking about and didn’t think I had been smoking my socks. 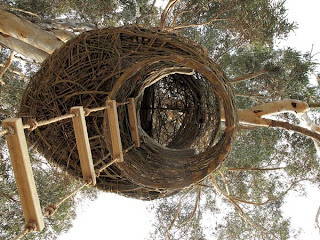 The bigger story is that it is woven out of alien trees. More specifically Port Jackson/Black Wattle which is abundant in the water catchment areas of the Riviersonderend Mountains.
It also has alien poplar trees and then dak riet to fill.
It’s made in Riviersonderend where I collaborate with Mariki and Beyers Beyers of Bloemenkraal.
They specialize in working with aliens and the result is providing much needed jobs in an area where there aren’t many.
It’s huge 3m x 2.5m, and can carry two adults and a small child.
The original dream was for them to be erected on game farms as chill spaces that functioned as hides for the occupants to view game at a watering hole or river or bird watching. Watch those spaces.
Suspended from a tree and hung about 3meters off the ground to keep you out of reach of any dangers.
Access is via a rope ladder that can be rolled up and stored.

First one's sold and we are currently designing one for 4 adults for a Russian client.
Posted by Animal Farm at 9:03 AM